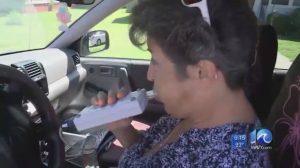 Even if your conviction happened before the Interlock and the FR44 laws came into effect… look what happened to one woman in Virginia!

If you’re convicted of DUI in Virginia, you’ll be required to put an interlock ignition on your car. That law went into effect in 2012, but one Hampton woman says she was forced to put the device on her car even though her DUI conviction happened 12 years ago.

After almost two decades of highs and lows, Hampton’s Jacquelyn Braden wants to focus on her 1-year-old granddaughter.

But Bella has no idea what her grandma has gone though.

“You know I shouldn’t have been drinking,” Braden said.

Braden’s nightmare happened when she got the DUI 12 years ago. Her kids were in the car when she was pulled over in the middle of day. It was her second DUI in five years.

“That was wrong,” Braden added. “I shouldn’t have had the kids in my car.”

Braden was sentenced to three years in prison because she was classified as a habitual offender. It was an experience she says changed her life.

After she got out, she didn’t drive for years. She wasn’t able to get her license back because of lingering fines.

“I never had the money to pay off my fines, because I was a single parent trying to raise my daughter,” Braden said.

Last year, she finally paid them off. She even took an alcohol awareness class again, but when she went to get her license back she got a surprise.

“Then they were like you got to do the interlock,” Braden added.

Even though Braden’s DUI happened 12 years ago, she now drives with an interlock ignition device attached to her car.

“I should be able to start my car and this is what I got through,” Braden said after blowing into the device. “I can’t get from here and maybe two blocks up and I will have to blow again.”

In 2012, Virginia law began requiring interlock ignitions for all drivers convicted of DUI. That happened years after Braden was arrested and even after she spent three years in prison.

“I don’t think it’s right, because I was out of the timeframe when they made it mandatory,” Braden added.

10 On Your Side contacted the DMV. A spokeswoman told us she is not able to talk about Braden’s case, but did tell she would contact Braden directly to explain. Braden was told she was given the interlock because her fines weren’t paid off until 2018.  State law does allow DMV the discretion to put on an interlock even if a judge doesn’t require one. She believes it is overkill.

“That’s the only thing that stopped me from getting my license back,” Braden said. “It wasn’t that I wasn’t paying the fines. I just couldn’t keep up.”

The habitual offender tag is now gone. Braden says she put her past in the rear view mirror.

“I know what it cost me, and I’m not willing to lose what I have again,” Braden added. “It’s taken me too long to get where I am. I’ve done my time and I’m still paying for it. When do it get to stop paying for my mistakes years ago?”

Braden has had the interlock on her car for three months. She will have it taken off in three months if there are no violations.